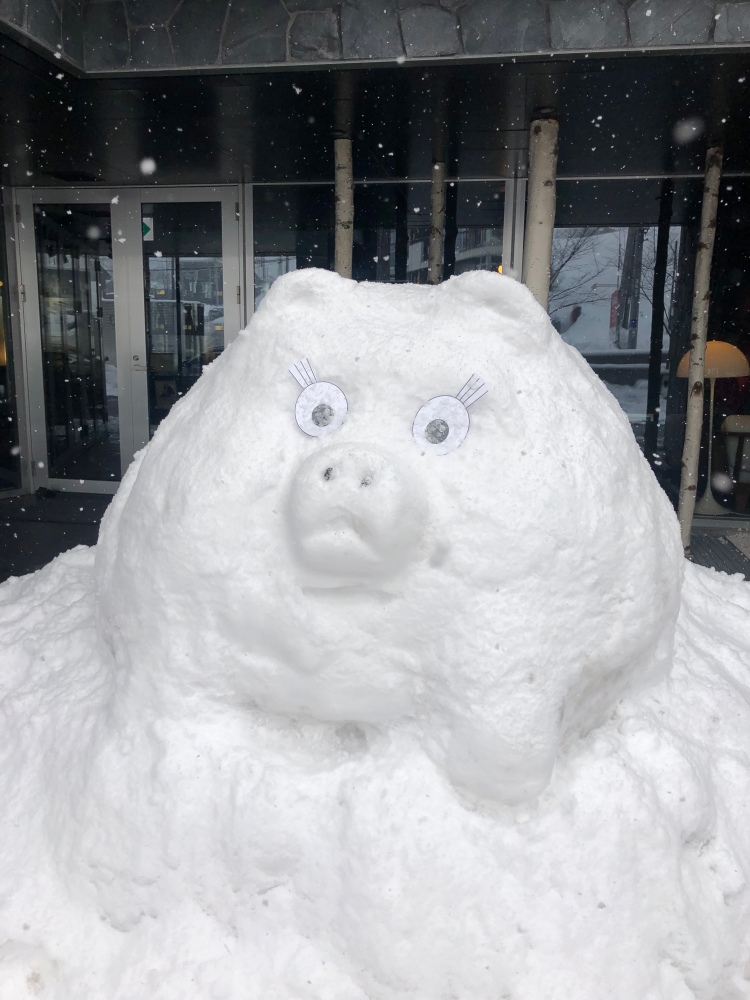 Bang in the middle of Chinese New Year the temperatures dropped to a icy -40 degrees, and it started snowing like crazy. Japow was back.

To the point where just sitting on a chairlift for 10 minutes would turn you into a living snowman. We were working pretty hard during the day teaching the new generation of shredders, and trying to get in as much powder skiing at night before spring hits.

But skiing at night when everyone had already stolen all the fresh tracks during the day does get to us powder hunters sometimes, so we decided to go find our own freshies. At night, by head torch, in the backcountry. 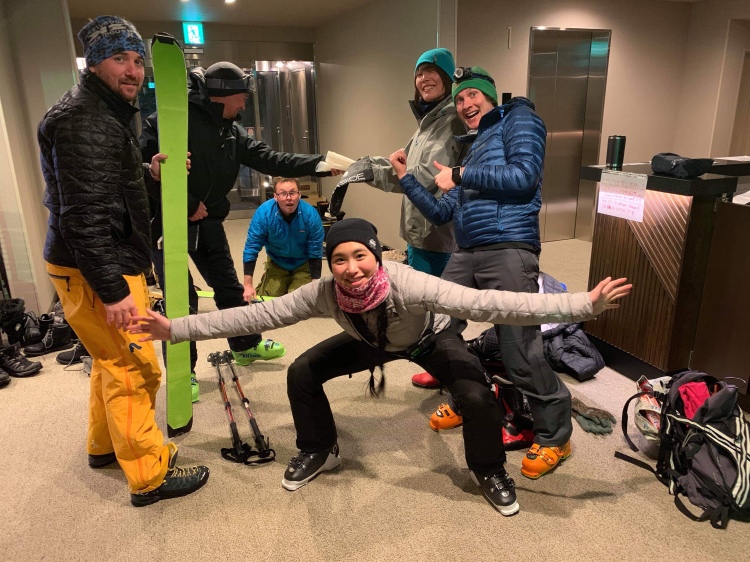 Here is the night touring team! And, we are bringing our skins this time 😉 All of these legends are well experienced in the back-country and in Chisenupuri, where we were going to ski.

Nupuri means “mountain” in the Ainu language. The former ski resort sits on Mt. Chise, adjacent to Mt. Nitonupuri. It’s close to the town of Rankoshi, which is the next ski area from Moiwa, 30 minutes drive from Hirafu. At 831m, it is a little higher than Moiwa. Niseko’s mountain; Mt. Annupuri stands at 1308m, but its vertical drop starts at 1200m with the lifts. Similarly awesome snow conditions, just with 90% less people. Lifts make a huge difference to ski traffic!

But of course we didn’t need lifts where we were going. 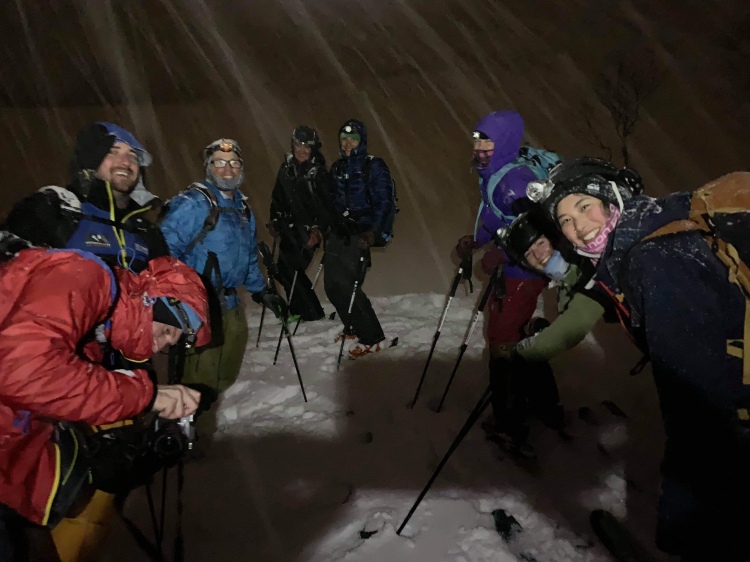 We bundled out of the toasty packed cars into the -30 degree freezer. Clicking into my touring bindings, I realised that I hadn’t used them since hiking Mt Yotei, last year.

Instead of 5 hours, it was 1.5 hours up to the top. The snow was soft, grippy and not too deep, perfect for someone who is beginning their touring experience. Dejan led the pack and he was a really considerate trail-breaker, making as few kick turns as possible, the trail snaking gently up the hill. 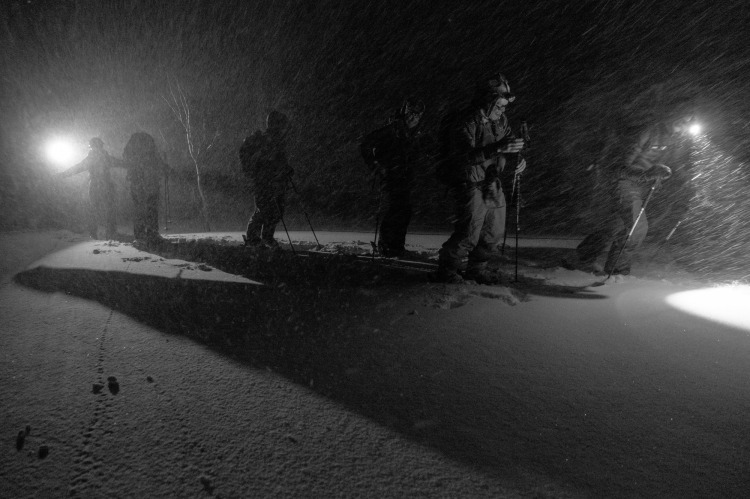 Up until the top of the hill, we were fairly sheltered by the strong winds, so it did not feel too cold. After 1 hour, we reached a spot high enough that the terrain wasn’t hidden by other mountains now. Every mm of our faces not covered up in material burned with the intense cold wind.

The wind had scoured the terrain up here to a bare icy layer. It got steeper and the kick turns were really tight and slippery. We made our last few steps up to the ridge, looking over a beautifully untouched back bowl.

We unclipped our skis and started ripping our skins off the base of our skis, ready for the ski down. Gloves were NOT allowed off. It was so cold that frostbite was a big risk up here. The only cure the team could immediately come up with was…. Whiskey. Lots of Whiskey…

We were ready. All 9 of us shone our head torches down onto the slope below. A perfect, un-broken surface. It was steep too. Making a safe decision to ski to the side of the gully, was going to give us a high escape route should an avalanche raise its ugly head.

One by one, in sight of everyone else, we glided, bounced and fell through the powder. It was super light, and you just felt like you were bursting through clouds of white. Skiing has never felt so smooth.

The beginning of the run started in quiet appreciation…. followed by yells of ecstatic happiness. From everyone.

We regrouped in a huddle after skiing the back bowl and its incredible run out. Eight huge smiles greeted me. Everyone was stoked!

Michael cracked out a ski-touring-sized Champagne bottle, and along with the rest of the Whiskey we consumed a little more liquid courage…

The last pitch back to the start of our skin track was over rolling hills dotted with trees, with a large gully cutting through the middle, filled with powder snow.

My light was failing now so Dejan offered to be mine and Graham’s eyes for the next part, so the three of us set off at speed. Dejan was having a lot of fun and powder was kicking up in huge clouds that I would burst through, blind for a second in white then darkness again. White, dark, white, dark…

I couldn’t keep up and saw the gully racing up towards me round a tree, I knew speed would be key to prevent being stuck but as I straight-lined the last part, a small tree appeared. I clipped the tree just barely avoiding the trunk, but it was too late for Dejan who was all of a sudden right in front of me… SMASHING into our lovely guide, taking him off his skis, we ended up in a pile in the snow. Oops. 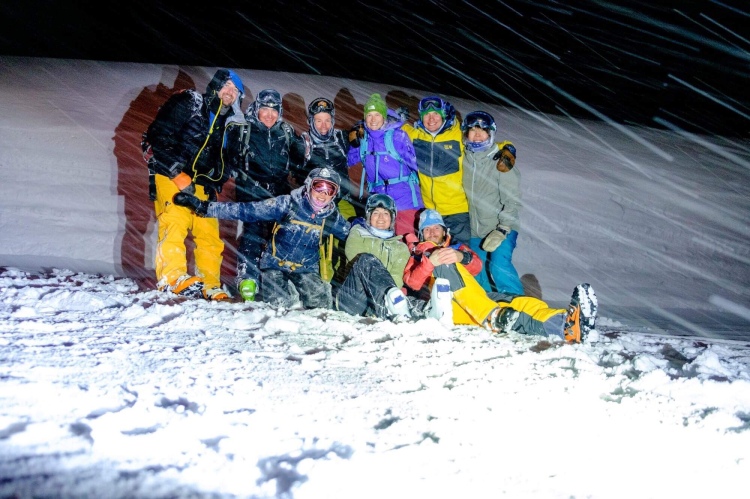 All alright, brushing off, re-grouping, and having a little giggle about how I was never allowed to whiskey-and-ski again, we skinned back to the car and packed up our gear into the boot. 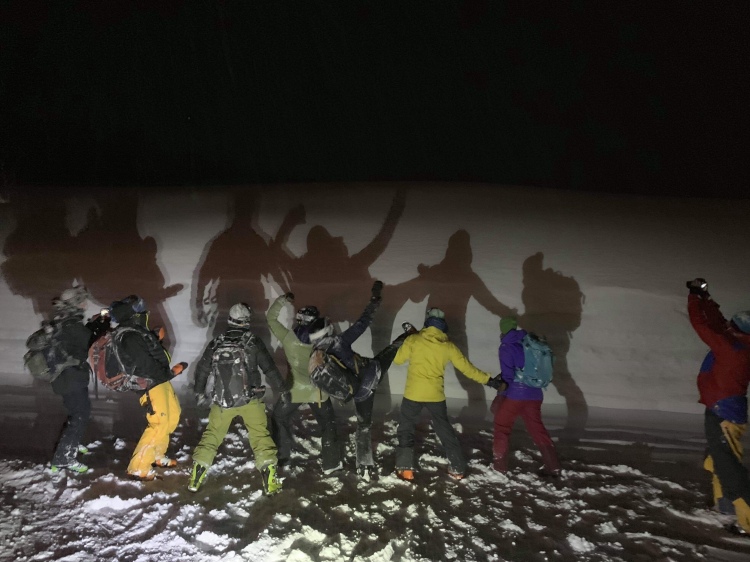 All in all, I had a superb evening ski touring in the wilderness that is just out behind Niseko’s Mt. Annupuri. One that will be remembered forever, rather than forgotten at the bottom of a whiskey-glass in the bar 😉