“Certainty of death, small chance of success.. What are we waiting for?”

The recent luck we had after hiking Mt Taranaki in the deep snow on a bluebird weather day only grew as we approached the crux of our trip.

Flying through bright green rolling hills with bizarrely placed fence lines and cows perched atop of peaks, it was like being transported directly onto a perfectly groomed movie set. The Shire in Lord of The Rings for example…

A matter of fact, many locations in New Zealand are actually LOTR movie sets. On the way to Whakapapa Ski Resort, we took a short walk to Tawhai Falls, which happens to be the spot where Frodo and Sam met Gollum for the first time. It’s a beautiful 13m high waterfall with super clear water spilling out over red sand and rock.

Our first thought was to go and shred spring slush. Ski instructors never say no to skiing somewhere new.

But… we found a better deal.

The NZ Great Walks season was about to open, in 4 days, and the park rangers had just opened up the Tongariro Northern Circuit as safe to complete. It had been closed for the winter due to avalanche risk, too cold and dark, and too much snow.

The Tongariro Northern Circuit is the longest of the three walkable trails, with 3 huts complete with beds, water and some cooking facilities such as gas stoves. It takes 2-4 days to complete, depending on how hardcore you’re feeling.

We were feeling semi-hardcore, so we decided to camp in 2 of the 3 huts, with a 8-9 hour trek on the first day, a 5 hour scramble on the second day, and a cruisey 3 hour downhill stroll on the third day.

The Great Walks website advises not to attempt this walk outside of the great walks season, which is between early May and late October.

We had arrived JUST at the right time, we had exactly 3 days to complete the circuit before all the huts were subjected to an extremely long waiting list and there was no chance you could stay without booking months in advance. In this time period however the huts are first come, first served so we planned to walk the route backwards, hopefully to avoid arriving without a place to sleep.

Not really having much time to prepare (couple hours in the afternoon), we got a couple of bags packed with cereal bars, 6 pairs of spare socks and plasters, and got some rest before we jumped on the trail for the first big day.

This was my first multi-day hike in New Zealand beyond hiking to a hut for one night then hiking out. Mentally I was a little nervous as an injury could lead to being stuck in the middle of nowhere with help being 9 hours away on foot.

The trail to Waihohonu Hut starts in a lush green forest, the dappled sunlight breaking through the leaves whilst the shade kept us cool, before emerging into dusty scrubland with dry New Zealand desert plants.

The trail was marked only with the gravel path with subtle markers, which at points just turned into a game of “find the orange triangles” which were sparsely positioned along the track.

After 5 hours, mood was falling fast as hunger pangs had set in and hot patches were appearing on the feet. It was really hot and the sun blared down on us. Hiking, boots off, applying plasters, boots on, hiking, adjusting plasters, hiking, adding more plasters, hiking… needless to say we were glad to see the first hut. But only for lunch. Our plan was to continue on to the second hut today.

Waihohonu Hut was gorgeous. It was newly built replacement for the old hut, and slept 28, but also a kick in the teeth that we hadn’t chosen this one to stay in. Compared to other huts in New Zealand I had stayed in previously, this was a hotel.

We could only hope that the others were also this nice…

In the next leg of the journey we saw the landscape transform from dry grassy bush to barren black sand and flowing formations of lava. We jumped dried up streams and climbed black sand dunes and scrambled up cliffs of solidified molten rock.

This world was unreal. There were no trees or green plants here, the volcanic eruptions had stripped this place of any nutrients available to support young fresh plantlife.

Our pace picked up even though we were still counting the hours down until we could rest. It felt like someone had used one of those mallets you use to butterfly chicken breasts on my feet.

We checked the time and we had predicted an hour left to go, at this point my shoulders were now on fire from the backpack, and we were searching for any sign of a roof.

Amazingly whoever built the hut located it in a very considerable location so as not to spoil the view. It was just around the corner of a large pile of basalt.

The Oturere Hut was much cozier and slept 26. It was much colder here and every little bit of warmth from cooking on the stoves was appreciated. We were very lucky and managed to nab a spot, but the hut was pretty much full.

Spending the evening resting the feet, reading and stretching was a great way to wind down as the sun set over Mount Doom and dusk set in.

I discovered that when you are staying in these remote huts or van camping, with only the water that is collected via rain; gas flown in by helicopter; and with no electricity or lighting; that your body adapts to the natural rhythm. Once it got dark at 8pm, we went to sleep.

The next day I awoke surprisingly springy. The first leg of our trip was a hot, dusty stroll on airy pumice and then a gorgeous trek through “trees” of lava on this plateau. We could again see the little orange markers extending out as far as we could see.

…Until to our horror the little orange markers started to climb up this steep, narrow black ridge covered in loose pumice.

Changing to a fresh pair of socks and making sure that all the plasters were still intact, we began the steepest climb of the trip.

And it just didn’t stop.

We had found the snow as well so now we had to pick our way around patches of deep spring snow and climb what looked like an impossible wall of scree.

There was sulphur smelling steam bellowing from the side of the trail, an indication that this volcano was well and truly still active.

We reached the top.

Gasping, but not from the climb… from the view in front of us. 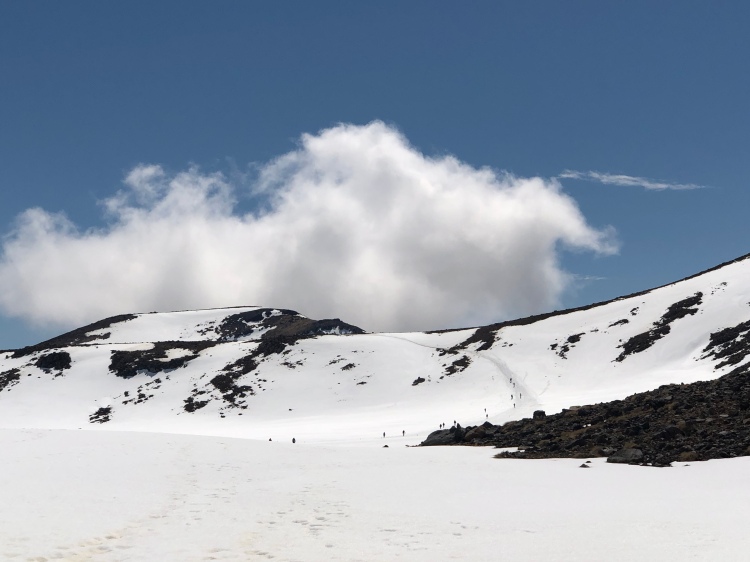 We started to see hundreds of people. Our lone struggle through this desolate volcanic world was no longer so lonesome.

These people were hiking the popular Tongariro Alpine Crossing day hike. An intermediate 7-8 hour hike over 19.4km one way.  It’s a chance to get a good view of Mt Ngauruhoe, which was used as Mt Doom in Lord of The Rings, when Frodo journeys with Sam to destroy The One Ring.

We thought we had already done the steepest part of the hike but in fact we were very wrong.

This last stretch up the ridge next to Red Crater was volcanic sand, which made it near impossible to climb. Sam and I were starting to question why we had hiked backwards around the Tongariro Northern Circuit.

Looking back on us we could see deep blue-green pools, next to a red and black molten lava crater, and in front of us was Mt Doom.

Time for a break, sheltered from the freezing wind we had a lunch stop before we moved on. It’s all downhill from here!

Downhill was tough, but the rest of the way the trail was maintained with chains, ropes and sometimes steps to help us down. We reached this plateau of spring snow. It was really warm but luckily for us the snow held its shape enough for us to not be tramping through rotten slush.

After descending a few hundred metres we escaped the snow again, back to a really well maintained trail with stairs.

The landscape here was again completely different, we could see where landslides and avalanches had carved channels through the landscape, and even differentiate between two eruptions – one lava trail was red and one was black.

Sam was starting to struggle with the descent. Its tough on the knees, and when you’re already a ski instructor spending your entire time going downhill… your knees start to really hurt. My advice for anyone hiking is… you know those weird poles you see all the pro hikers and old guys using? They definitely work to relieve the pressure from your knees and ankles.

Luckily the trail flattened out and we were walking on windy boardwalks over a marsh with a bright orange river flowing through it. It was very pretty and a great end to our second days hiking.

We were very lucky to get a bed in Mangatepōpō hut that night. A group of Maōri kids had beaten us there and had thrown their stuff over every bunk. Luckily when the adventure guide that they were with noticed that it was going to be a full hut he made them set up their tents and camp outside.

A couple who had started later than us from the previous hut made it but even though we had offered to squish they decided to continue the last 3 hours in the dark. 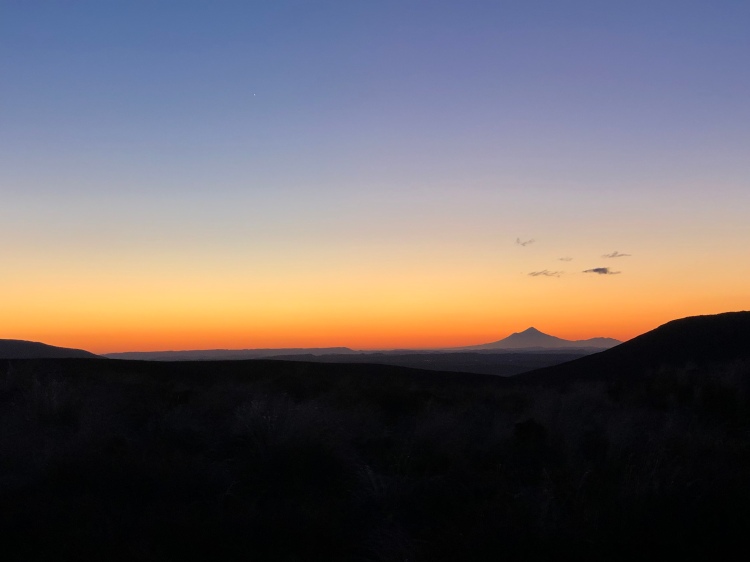 Something really amazing happened that night. On the way back from brushing my teeth  I had to stop and run back inside for my camera for this picture. The adventure guide said he had been hiking this track for 11 years and had never seen anything like it.

The sun was setting on such a clear sky that Mount Taranaki was visible as a silhouette.

Compared to day one and two, day three was a piece of cake. Downhill all the way, 3 hours, already had the itch for hiking, and a lighter pack than before, we flew down!

Most of the track had washed out due to the snowmelt and heavy rains so I really wouldn’t have wanted to do this via a headlamp the night before. Kudos to that couple who made it.

Stoked, sweaty and shaky, we dumped all of our stuff into Sonny, and found the nearest hotel shower and then set off for Taupo.