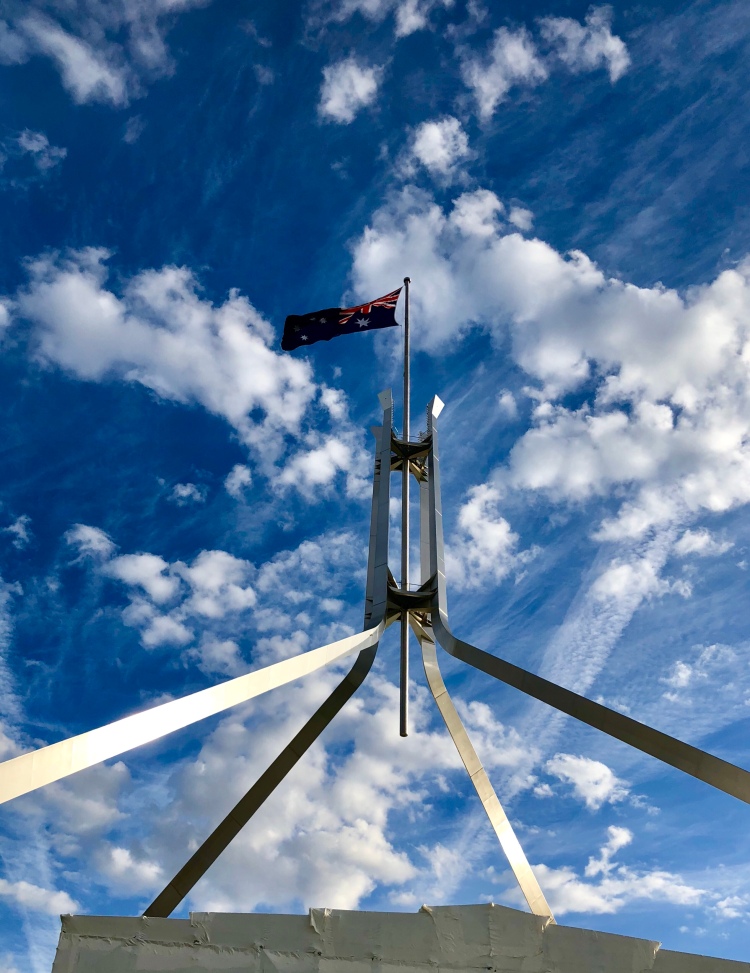 The Jack and Stars fly high over this futuristically organised city.

Canberra is Australia’s capital city. A question that will trick most at a pub quiz who think Sydney or Melbourne is the answer. It was built after a long unresolved debate between both cities, the largest ones in Australia, over who was going to be named the Capital. Following an international contest for the city’s design, a blueprint by American architects Walter Burley Griffin and Marion Mahony Griffin was chosen and construction commenced bang in the middle of the two cities in 1913.

The city of Canberra was designed in the centre of five large hills, and significant buildings to the city such as the Parliament House, were aligned on axes arranged around a huge central target, apparent enough to be seen from satellites. The city features geometric shapes such as circles, hexagons and triangles giving it a neat, modernised look. 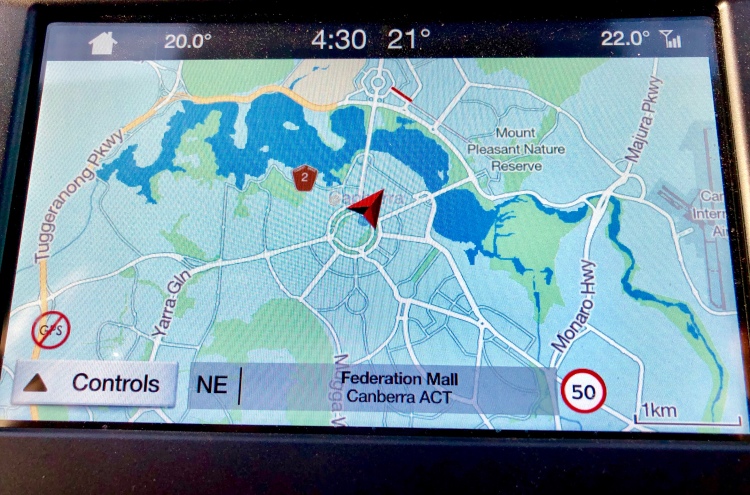 It appeared very obviously like a bullseye on our Sat Nav as we approached.

The line of view was extremely accurate, with the road from the Parliament House lining up with the War Memorial, and then with the highest of the 5 peaks.  There was even a standing point, looking through a window on the roof of the building to see this perfectly straight line.

It is like an OCD persons dream to gaze upon this city.

Parliament House is at the centre of the city’s crop circles, the meeting place of the parliament of Australia. The building was designed by Mitchell/Giurgola & Thorp Architects. After exceeding its budget of $220 million, and passing the deadline of opening for Australia Day; 26 January 1988, it was opened on 9 May 1988 by Elizabeth II, Queen of Australia. It cost more than $1.1 billion to build. 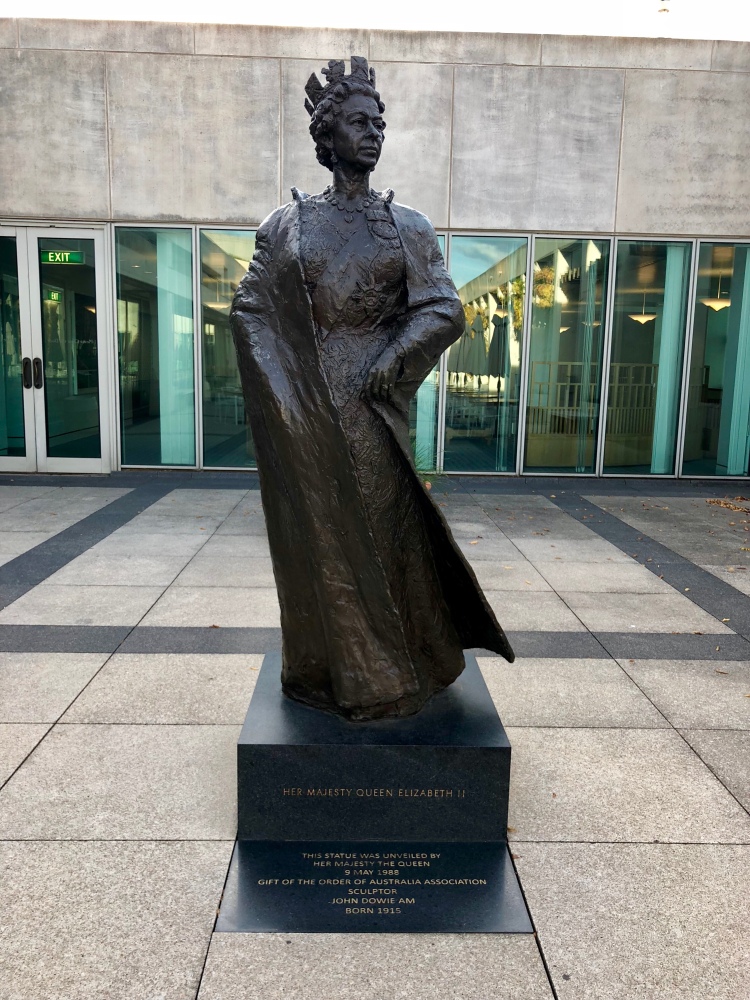 For free, you can take a look inside. It’s neat, modern-looking and made from luxurious materials such as marble of different colours in the foyer.

The Senate Chamber commemorates the colour scheme of the British House of Lords, decorated in red, but muted to an earthy tint like the colours of the outback.

The House of Representatives is decorated in green to reflect the colours scheme of the British House of Commons. Again, the colour is muted to suggest the colour of eucalyptus leaves, flourishing in the Australian bush. 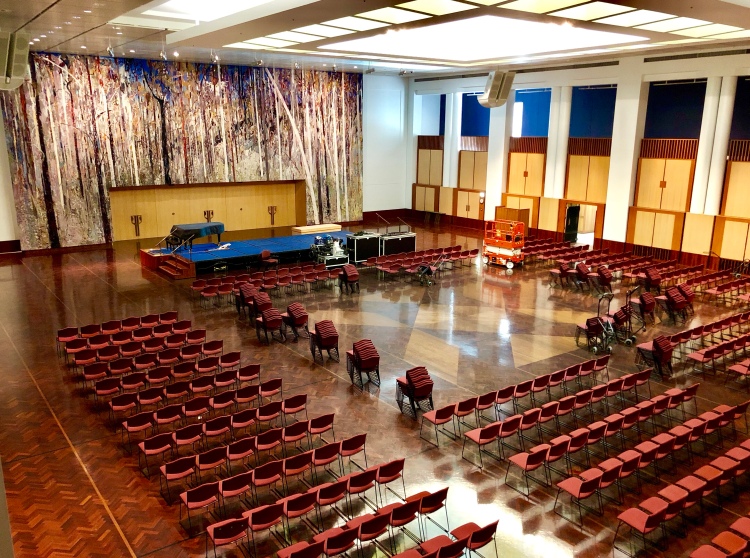 The Great Hall is home to functions both parliamentary and federal; and for the general public, such as weddings and the UoC graduation ceremonies. 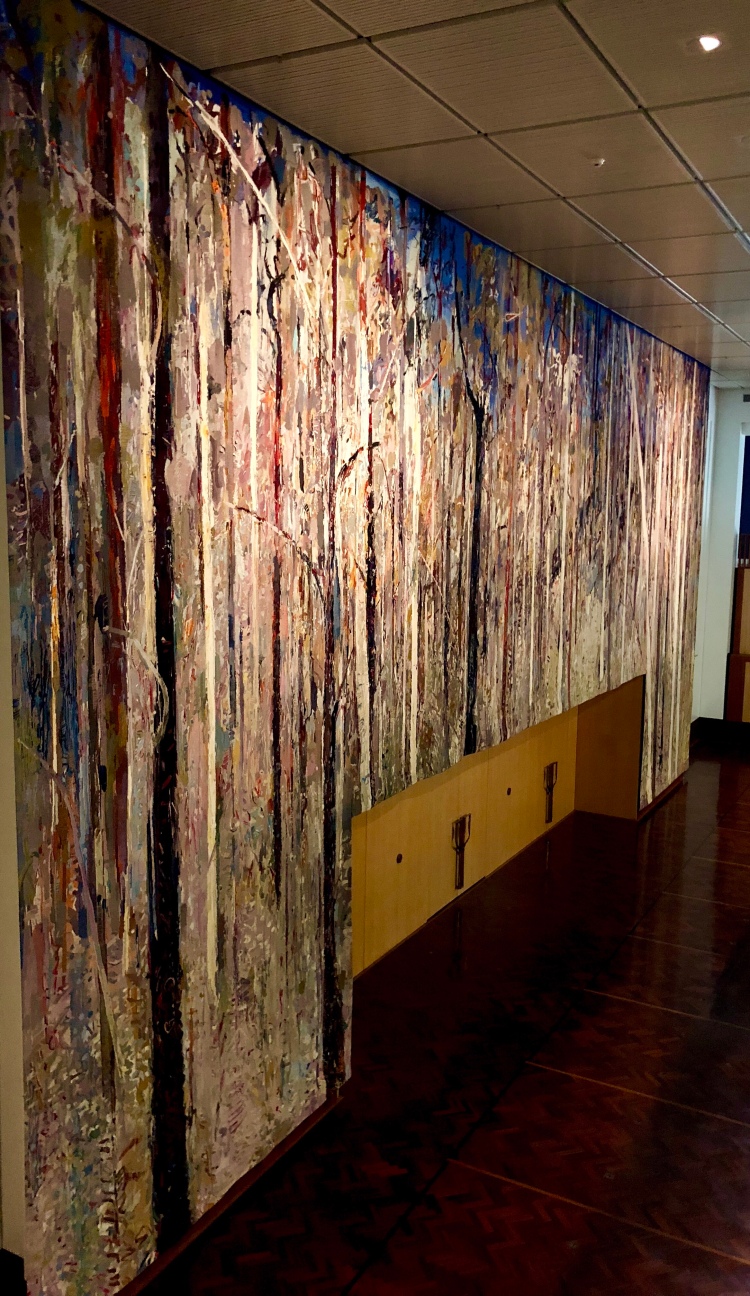 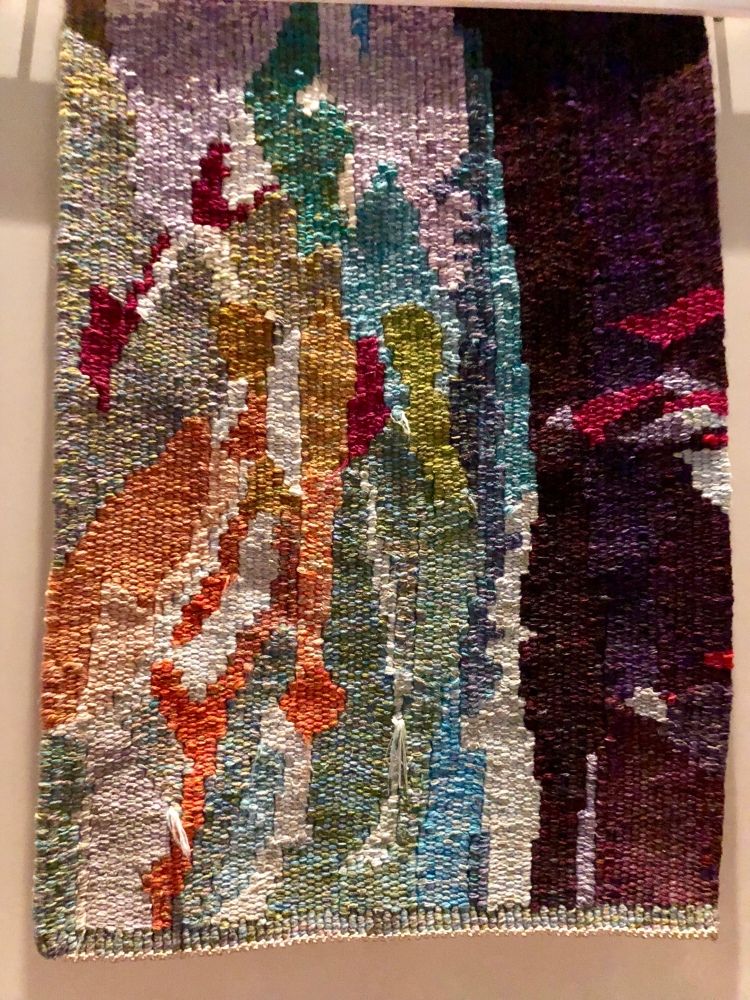 In this room, there is an incredible tapestry that spans across an entire wall. It was woven by hand, on a loom displayed in this building. The tapestry is an enlarged version of a painting by Arthur Boyd, the original of which also lives in the building. At 20 by 9 meters, it is one of the largest tapestries in the world.

Sometimes The Parliament House holds Art Exhibitions here, displaying the over 6000 artworks, some from children of local schools or universities. Many of them are smart portraits of important characters in Australian Government. 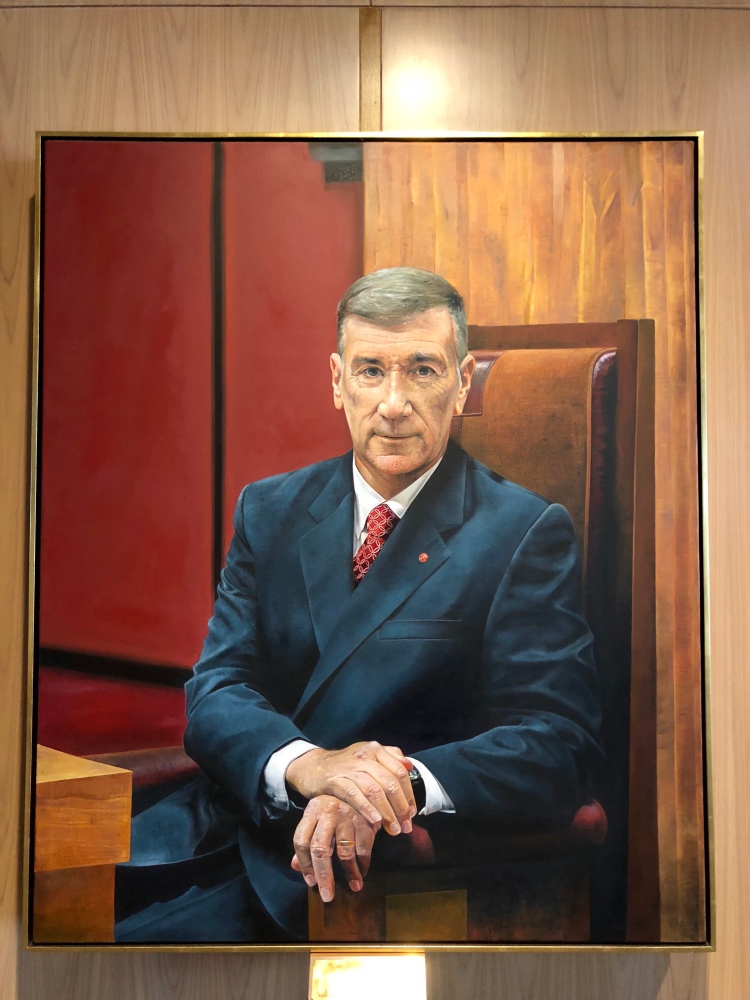 They are still commissioning them for the current Prime Minister, Governor general, President of the Senate and Speaker of the House also. 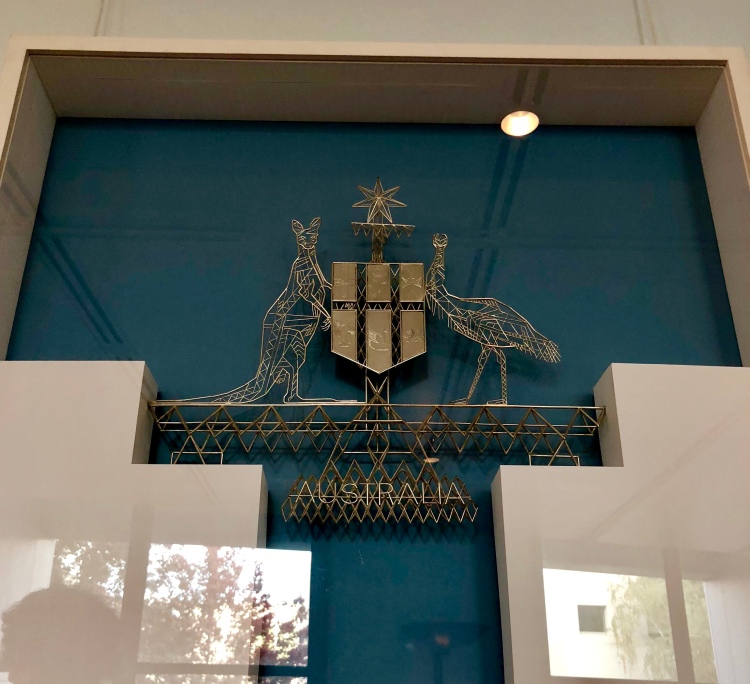 The Australian Commonwealth Coat of Arms that hangs here is like a work of art in wire. A shield depicting six symbols of Australia’s states; New South Wales, Queensland, South Australia, Tasmania, Victoria and Western Australia, is held up by their native animals the Red Kangaroo and the Emu. They were chosen to symbolise a nation moving forward, based on the fact that neither animal can move backwards easily – symbolising progress.

The seven-pointed Commonwealth Star atop of the crest also represents the states and territories. Six of the points on the star represent the original six states, while the seventh point represents the combined territories and any future states of Australia.

As the crow flies, down the straightest road from Parliament House towards Mt Ainslie, stands The Australian War Memorial.

Like most of this city, this memorial is clean, neatly sculpted, polished and relatively new-looking. Upon entering at 5pm, we realise that the building is really busy. Unusually busy for a War Memorial at this time of day. 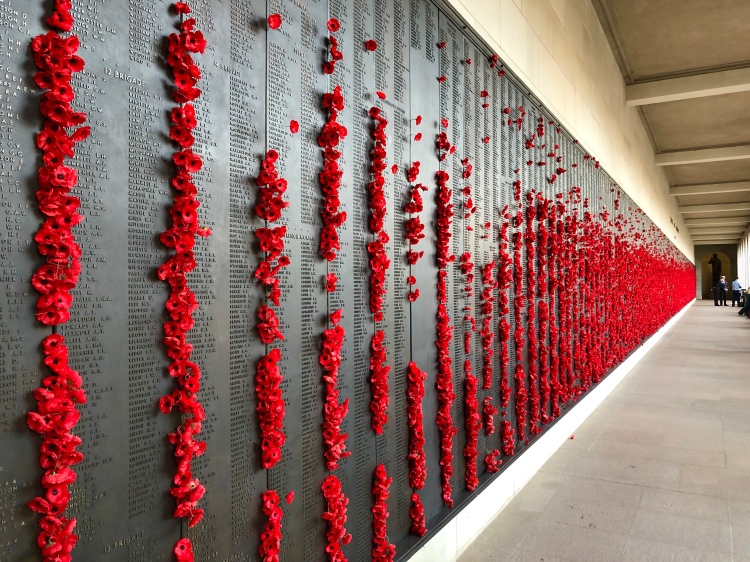 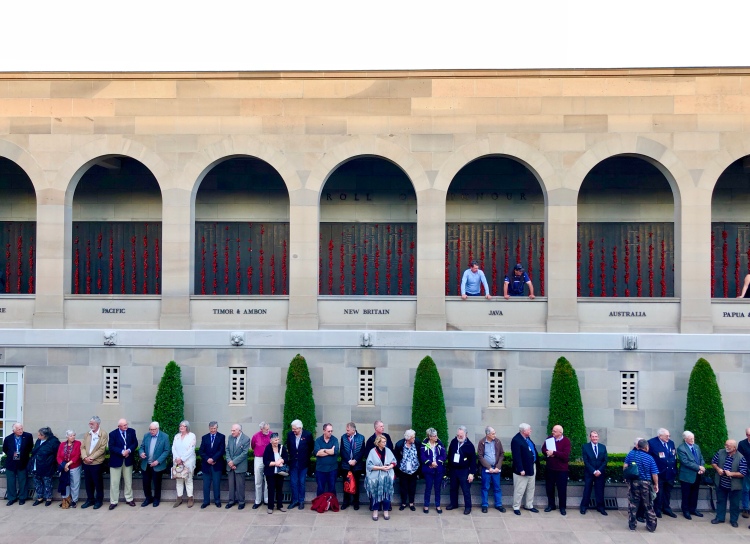 We were informed that at 5pm, family, friends and well-wishers gather for The Last Post Ceremony.

The Memorial farewells visitors each night by telling the story behind one of the names on the Roll of Honour which lists more than 102,000 Australians who have given their lives in war. This means that The Last Post Ceremony would have to go on for at least 279 years before everyone has had their own story told. 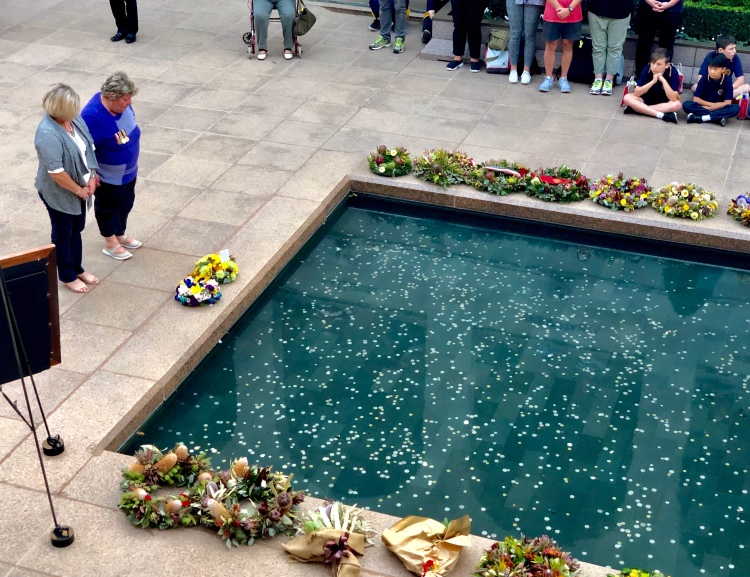 The ceremony was beautiful and wreaths of flowers were laid down by the shallow pool by teary members of the family. We sang the Australian National Anthem in unison with hands on hearts. It was quite a touching moment and humbling to experience the effect that war has on families on a different side of the world to my home country. 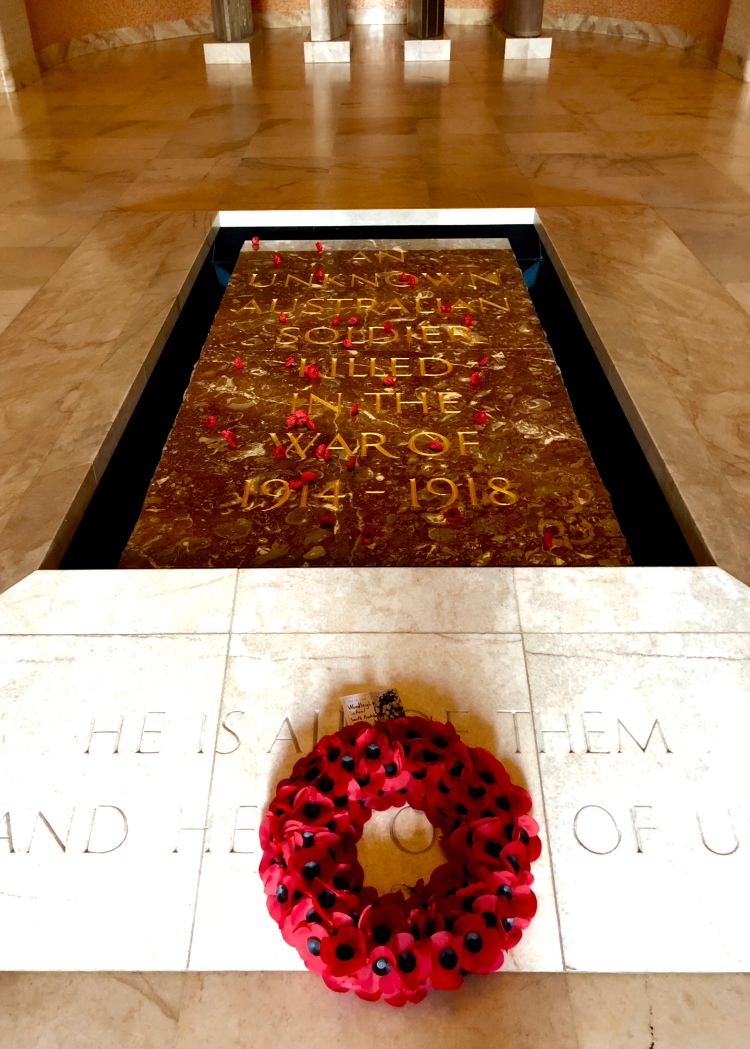 The sun sets on the War Memorial as we head off with pensive thoughts back to the car, passing some of the magnificent sculptures along the tree-lined road.

I thought this one was pretty cool, large pressed glass panels depicting a timeline of Australias war history. 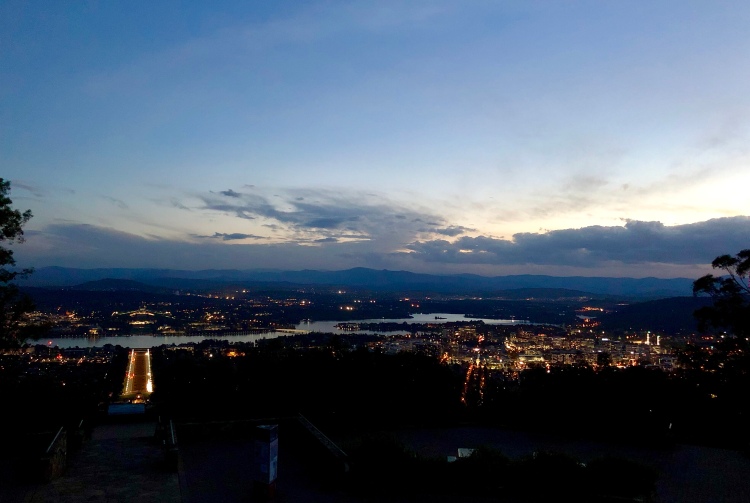 Dusk was starting to fall and we chose our final stop here, to be the top of Mount Ainslie. A worthwhile activity for any couple or tourist craving an exhilarating night view of the city, is a drive, hike or cycle to the top. Perfect.