There’s always that one friend at work who sticks on the Christmas hits prematurely and promptly gets an earful that “IT’S STILL NOVEMBER!” but this year in the Brawn family, they had no choice.

I was coming home for Christmas.

Arriving at Heathrow, I was greeted by a black cab driver with “Sara Brown” scrawled across a plaque. … Am I in London..?

One thing I could not stop noticing once I had arrived was how BRITISH everyone’s accents were! Everywhere I went sounded like being in The Savoy Hotel… “This way Miss Brawn!” (Turns out my past months travelling with the Americans has softened my once “posh-British accent”).

After 2 years away, and despite the big movement in politics which we won’t speak about, London was as I had remembered it. Soldiers buttoned up in red jackets and black fur hats rode well dressed black stallions down the streets full of solemn Londoners with red poppies pinned to their lapels.

The markets were decorated with mistletoe, and the shelves were lined with festive gifts. The Christmas spirit was in full swing.

This proud nation will sing about its own produce. Fortnum & Masons had hundreds of honeys from different parts of the country, and Marks & Spencer took the trouble to add the grower’s name on their British Strawberries.

Exploring London as a tourist was a responsibility-free and fairly pleasant experience.

Faces from the suits on the tube reflected the monotony of the stressful commute. Definitely didn’t regret my choice to chase the snow!

Changes have been made since I left though, trains have exchanged for newer and wider models, and the introduction of the Night Tube on the Piccadilly, Central, Victoria, Northern and Jubilee lines on a Friday and Saturday night means Londoners can enjoy a few drinks without having to worry about missing the last train home. 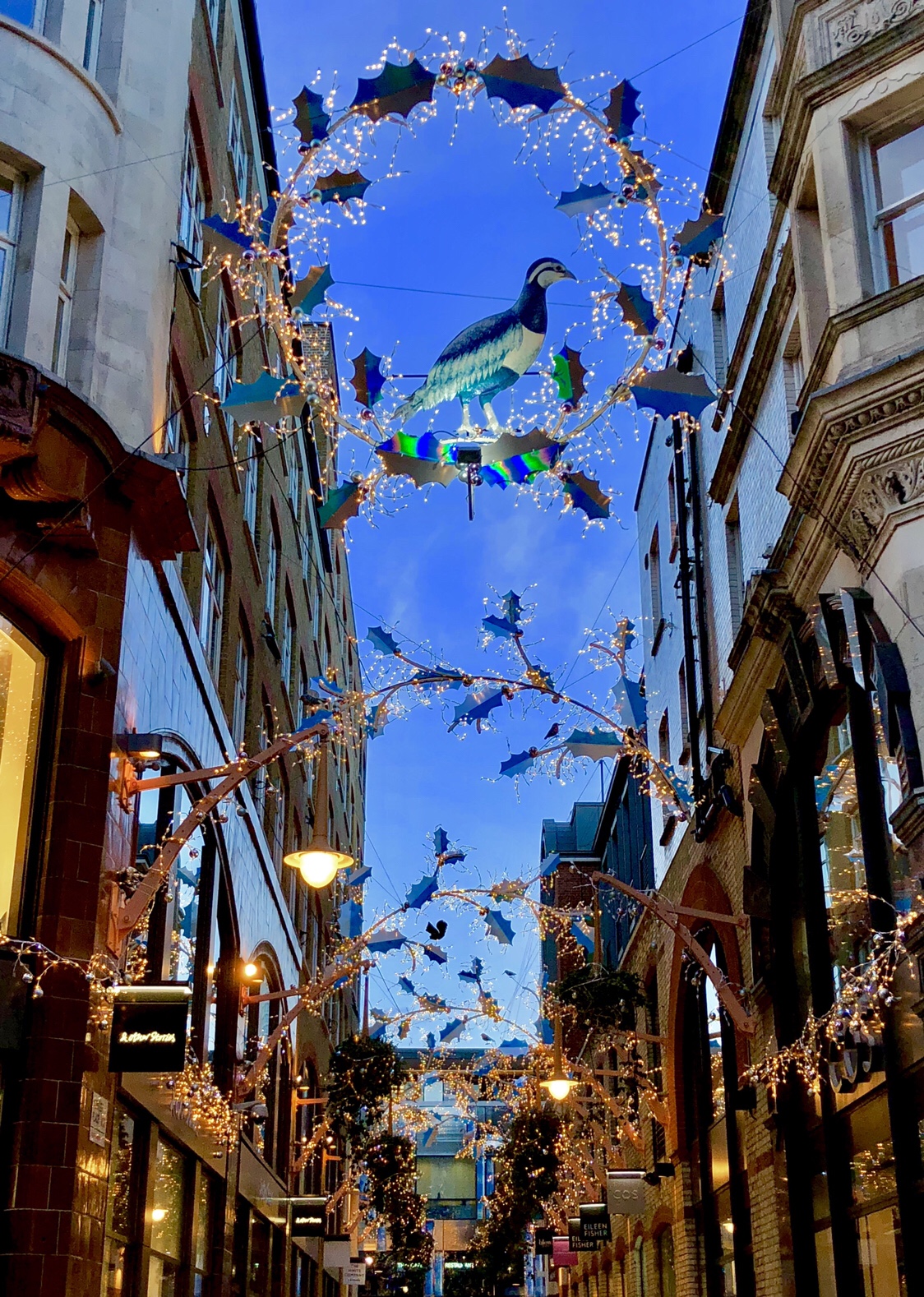 Or a chance to take a night stroll to view the lit up Christmas displays overhead. 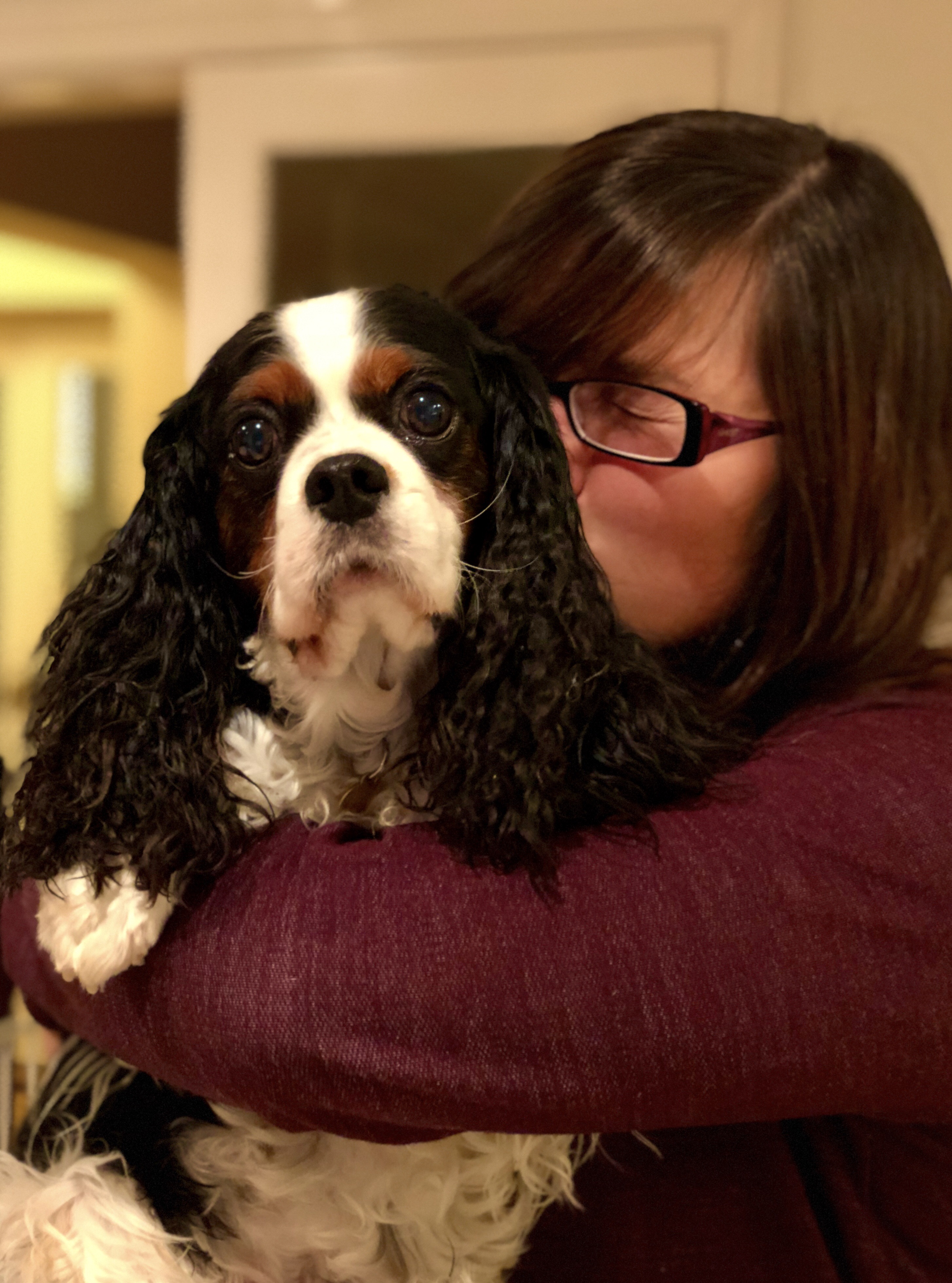 Upon returning home, I meet some family faces I haven’t seen for two whole years. After a face full of fur and flapping dog tongues, I couldn’t have felt more welcomed back to Stanwick.

Stanwick is a sweet old village and civil parish in East Northamptonshire. The name is derived from the Old English words stan ‘stone, rocks’ and wic ‘dwellings, farm, hamlet’. It probably means a stone settlement. There has been a settlement at Stanwick since Roman times at the latest. A Roman villa was excavated in 1984–1992 and several mosaics were found prior to the construction of a bypass and huge gravel quarry, now known as Stanwick Lakes. 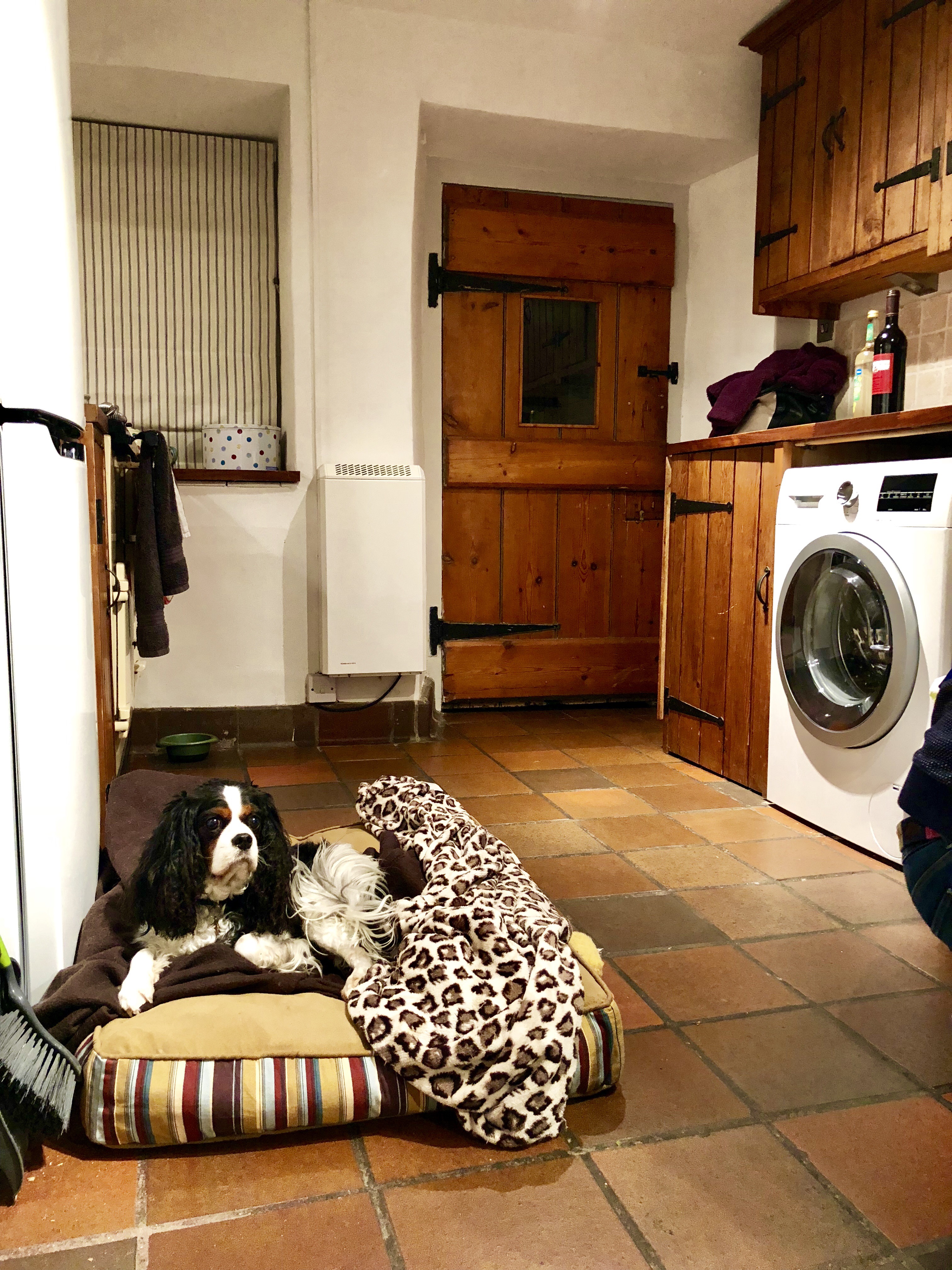 The dwellings around here are all brick laid and owners to large floral-rich gardens. During my time here I visited my sisters new house. Wooden barn doors, empty decorative gin bottles and union jack cushions gave this cottage a homely feel. Twiggy assumes her favourite position by the wrought iron wood burner.

I came to visit these two! After homemade lasagne and banofee pie, we curled up by the fireplace and watched some terrible British television and shared stories from the past couple of years. 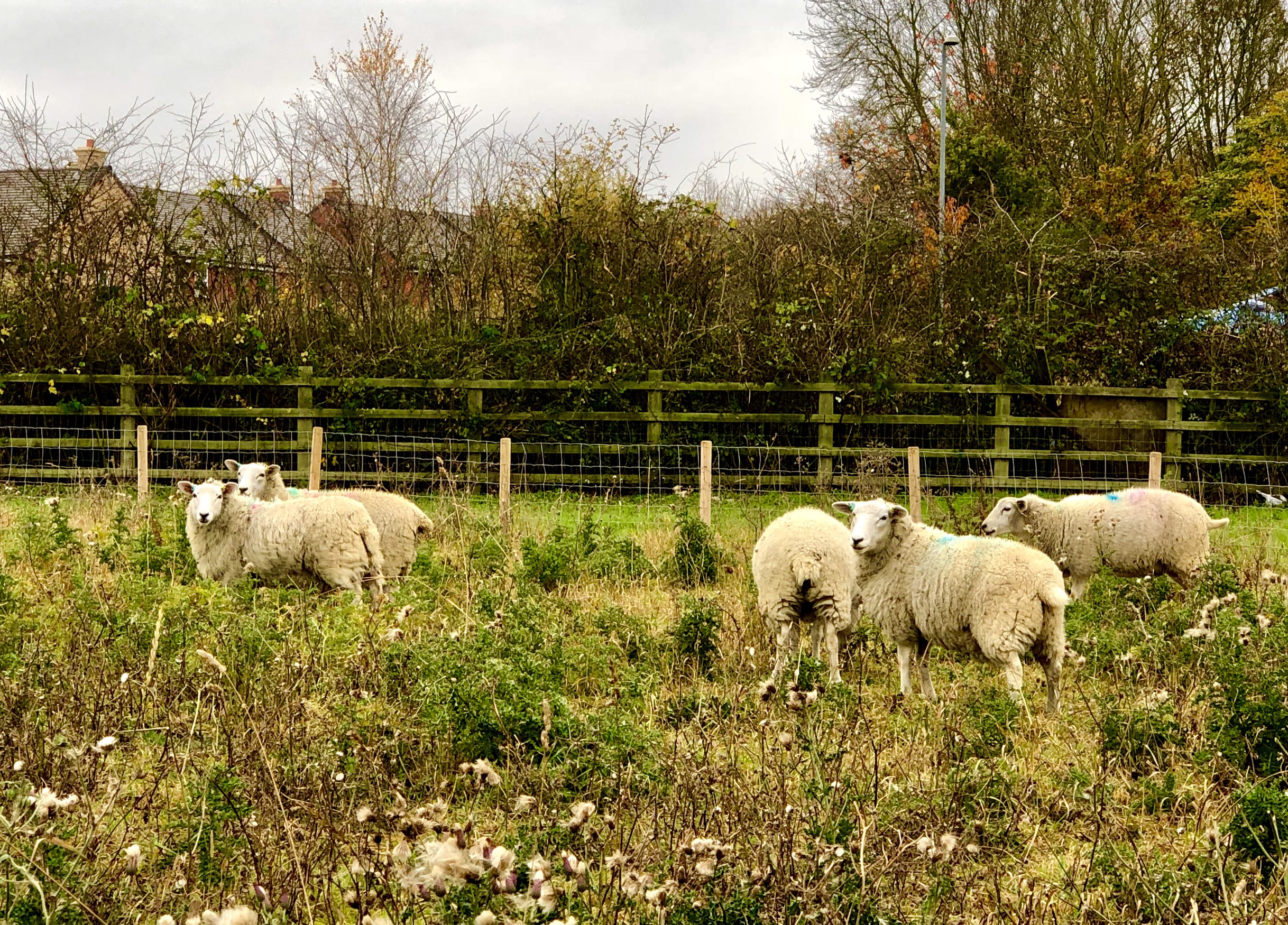 My parents now had grandchildren, or rather, grand-sheep. 26 of them. They run free around the fields in the back of the village, apart from one, who seems to always have his head stuck in a fence. Welcome to the Brawn Family.

This Christmas tradition of cake decoration has stayed in my family since I was old enough to squash coloured blocks of icing into vaguely christmassy shaped figures. Each year the sculpting attempts became more creative, from my 7 year old Halloween-like melted horror figures to something that resembled Christmas at home. 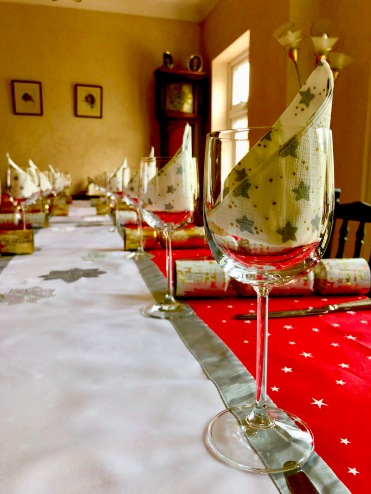 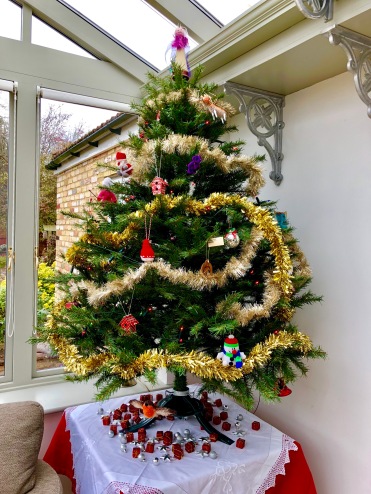 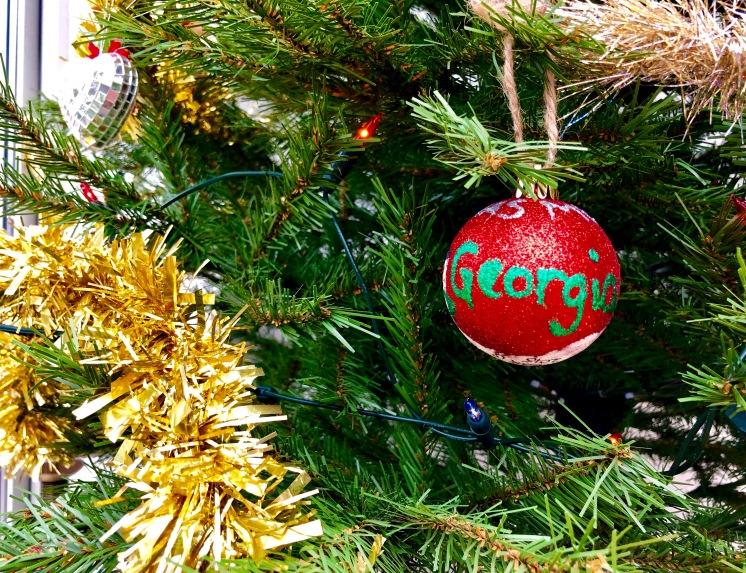 Christmas in the UK usually involves draping the house from head to toe in sparkly gold and silver tinsel and having a fir tree that sheds tiny green needles all over the carpet. The majority of the decorations are home-made by my sister and I’s childhood selves, and the slightly lopsided angelic creature I made when I was 6 still peers down from the top of the tree.

Christmas dinner is a little different wherever you are in the world, from BBQs on the beach in Australia to KFC in Japan. In the UK, a whole roast turkey is shared between the family with an assortment of stuffings, boiled and roast vegetables, Yorkshire Puddings, sausages wrapped in bacon and flavourful turkey gravy.

That’s not all though. Afterwards a booze-soaked Christmas pudding is set alight and eaten hot with more booze in the brandy cream poured on top.

….and THEN… a platter of assorted cheeses with crackers comes out with grapes and celery. At this point barely anyone can move.

Room for an after-dinner mint?

After 2 years working to make another family’s day special, I definitely enjoyed the time with my own relations. Celebrating together reminds me that no matter where I am in the world, they are not too far away. And that we don’t need to wait until Christmas to see each other!\