In a whirlwind of terminal waiting, plane food force-feeding and sleepless turning, I awaken to the wheels of our Boeing 747 crashing down onto the runway in the post-typhoon gusts.

Going from Spring to Autumn in 22 hours really messes with your calendar… and I realised that in fact it was Halloween!

Arriving in a total mess, I was picked up at the station by my new home’s host Yuki. His AirBnB was close to Hamamatsucho Station, a convienient location for starting my next adventure by ferry to Hachijojima.

And I was welcomed Halloween-style by two beautiful little cats 😀

I had forgotten the impeccable level of hospitality the Japanese have whilst I was away, and was quickly reminded with a bowl of ramen and some good company.

After 24 hours, culture shock was starting to set in. Walking around Kanda, my favourite spot to ogle at fancy new ski gear (for cheaper), I realised that I’ve gone back to not understanding anything again. Isolation. Ahh!

“Hey do you wanna come out with my friends for Halloween?”

I usually avoid Halloween like the plague, in the UK it’s usually an excuse for everyone to dress super provocatively and parade half-nude and half-coherent around the club scene… still a child at heart, my usual Halloween involves eating candy inside and watching my favourite horror films.

But! This is Japan, where modesty is more common and kawaii characters are favoured upon. Think of Comicon.

Shibuya, famous for having the busiest street crossing in the world, at Halloween, with people dressed up?!


It was CRAZY busy. Like being in a small venue concert, the crowd swaying as a unit, police everywhere trying to control the crowds, but making it worse!

Some daring individuals decided to show off in style by acquiring fancy vehicles and driving through the crowds!

The police sure gave this clown a good speaking to haha! 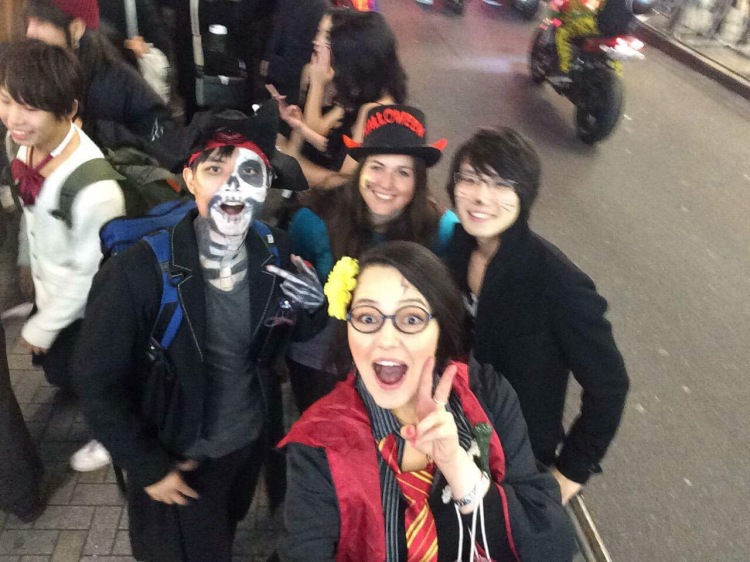 Cathy (Harry Potter) let loose with the coloured paints and made myself, Andy, Yuki, and in fact most of the passing crowd a bit more Halloweeny…! And she rocked it!

FamilyMart even took up the Halloweeny spirit and had one of their employees stand outside in a fried chicken packet costume. The dedication is real.

Despite the dangerously high level of bodies there, everyone came out to celebrate. Young kids rode on Dad’s shoulders and this too-cool-for-school pup was taken for a ride on this dudes bike.

We had a couple important people visiting too… As a coincidence, the real Donald Trump is visiting Japan this week (a Halloween nightmare maybe? Who knows!)

It was a truly incredible experience, maybe not to the older, well-established tourist, who were just looking for a relaxing place to taste Tokyo’s culinary delights, as I saw a few horrified faces being swallowed by the hordes of monsters.

What a way to start the next chapter of my life in Japan! 🙂