Circling Hakone in Kanagawa prefecture are mountains to interest most keen hikers. From easy 1 hour hikes to full day excursions, there was something for everyone.

We decided to climb Mount Ashigara, nicknamed “Kintoki-yama”, after a famous Japanese folk legend based on samurai Sakata no Kintoki. As a child, he was raised by a mountain hag on this mountain.

Legend says that, as child Kintarō, he wrestled a bear with his superhuman strength, splitting this rock in two. 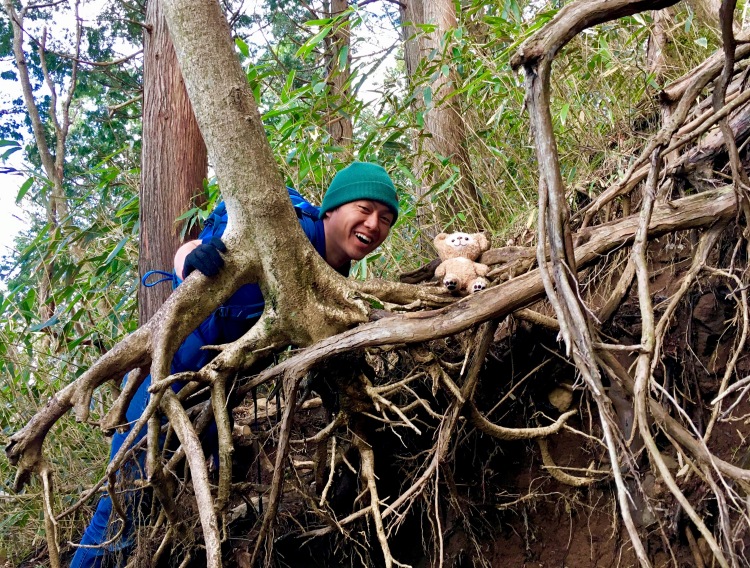 We also found a bear on our travels…

After an interesting hours scramble through tree roots, steps, trails and rocks, we reached the top and were met with an incredible view of Hakone and Mt Fuji.

The rest stop inside served a famous wild mushroom miso soup, and a sweet fermented rice drink called “Amazake” which is made from the residue left from the sake making process (non-alcoholic).

We got chatting to a keen hiker inside who made us sign a booklet of the names of the people who had completed the climb to the top. They had records dating back almost 100 years.

Some people’s names had made it onto plates of wood up on the “ceiling of fame”. These people has climbed this mountain 1000’s of times. The most being 4800 times climbed.

One lady who’s name was up there was Kintoki Musume, who happened to be the delicate old lady who served us the Amazake. She was 84 years old and had climbed this mountain every day for work for 72 years.

She also told us that The Emperor, whilst visiting her and his son, whom were good friends, gave her the nickname of Kintoki Musume. It mean’s “Kintoki’s Daughter”, possibly referring to her ongoing strength and dedication to this legendary mountain.

She’s quite the celebrity, having been filmed for NHK earlier this year, and has photographs of many famous Japanese people on the walls of the hut. Her dedication to the mountain shows as shortly after her interview she fell 1.5m and broke her ribs, but she is still climbing and working there with a belt around herself to support her.

Approx. 1.5 hour walk up, 1-1.5 hour walk down. Fairly easy but uneven path, may require some climbing of roots or steps.

Two entrances. We went with the less busy trail on the opposite/south side.

Toilets at the base next to a small car park.

Mountain Hut at the top with available food and hot drinks.

Advise is to go super early when it is quiet.